Sajid Javid Promises To ‘review Ir35′ – But Will This Be Enough To Regain Contractors’ Trust?

Over the past few weeks, each of the major parties has been linked to a potential promise to do something about IR35 – either as a manifesto pledge, as a result of a since-deleted tweet, or now – via a radio interview.

What have the major parties said about IR35?

Both the Liberal Democrats and SNP have pledged to review IR35 as part of their manifesto promises. A major poll conducted by us last week found that Conservative-voting contractors are likely to defect to the Lib Dems as a result of their stance on IR35 (and the Loan Charge).

The Labour party – the original architects of IR35 – have made no official promises on IR35, although some mistakenly took a since-deleted tweet by shadow small business minister, Bill Esterson, to be some kind of pledge to undertake a review.

Now, it is the turn of the Chancellor, Sajid Javid, to face the scrutiny of contractors.

Chancellor discusses IR35 on the BBC

In an interview with the BBC Moneybox programme this Saturday, he said: “One thing I want to look at again are the proposed changes to IR35”.

When asked if the IR35 changes should be scrapped, Mr Javid said that they should be looked at as part of a general review of small business taxation.

“We will be having a review. I think it would make sense to include the proposed IR35 changes in that review”.

On Sunday evening, the Chancellor tweeted this:

The thing is – will voters believe him? Is this enough to convince contractors to back their Conservative candidates on December 12th?

What have the Conservatives done for contractors?

Although the Labour party, quite rightly, are blamed for creating the Intermediaries Legislation – which became law in 2000, is is the Conservatives (‘the party of business’) who have arguably done more to damage the contracting sector:

Can the Conservative Party be trusted on IR35?

Here is a timeline of the Conservatives’ dealings with the Intermediaries Legislation – from pledging to scrap IR35 shortly after it was implemented (in opposition), to rolling out the new ‘off-payroll’ (IR35) tax to the public and private sectors as the ruling party.

Thanks to Dave Chaplin and the Stop the Off-Payroll Tax campaign for the graphic. 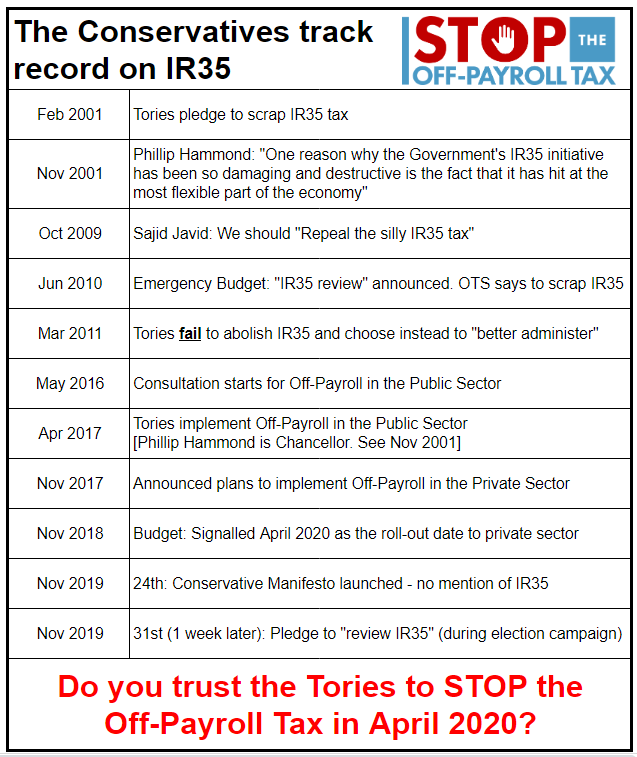 Why does any of this matter?

Many contractors consider themselves to be natural Conservative voters. With contracting roles heavily based in the South of the country (including London), contractors may also be disproportionately influential in the outcome of marginal seat battles at the General Election.

Our latest poll suggests that 85% of respondents consider IR35 and/or the Loan Charge to be the single most important issues affecting the way they intend to vote.

Will the Chancellor’s words reassure those affected by IR35, or is it a case of ‘too little too late’?